I’ve recently gone on a watch buying spree*.   For years, I used my cell phone as a watch, but I’ve recently come to realize how much I actually hate doing that.   It’s hard to be discreet about it and it just screams ‘I’m bored’ in a meeting.   Plus, watches have experienced a renaissance of sorts in the last 10 years and there are some really interesting new ones.

Of course, since I’m a technologist, I just had to understand how these things work.  The quartz ones are pretty obvious, although there is still a surprising amount of analogue, mechanical technology in even the most modern quartz watches.   Electrically driven watches were actually pioneered by two American companies, Hamilton and Bulova.   Pure digital watches (with numeric displays) were developed by Hamilton in the early 1970′s and lead to the digital quartz revolution (which is a fascinating story in itself, but for another time).  Up until this time, watches were expensive jewelery that one bought perhaps a 1/2 dozen times in your life.   But, as a result of mass manufacturing techniques pioneered by the semiconductor industry, companies like TI and Casio were able to crank out millions of cheap LCD watches that anyone could buy.

These innovations almost killed off mechanical watch manufacturing, particularly in Switzerland.   And it did kill it off in the US, as there was no demand for essentially hand assembled, fragile and inaccurate mechanical jewelery.  However, some manufacturers managed to survive through the 1980′s and emerged in the early 1990′s as objects of desire, cool symbols of a bygone age of hand made items.  Of course, marketing helped a lot.    Today, we even find a few new American watch manufacturers, like Ocean7, Bathys and the Rocky Mountain Watch Company.

So, what’s the point of all this?   Well, in my watch explorations, I bought a couple of interesting vintage watches that illustrate key transitions in the watch industry.   One of the fascinating things is examining how different cultures solve the same problem.   I was taking apart some mechanical watch movements (both broken and worthless), one Swiss and one American, both of roughly the same vintage and from products aimed at the same market segments.   Below is a photo of the spring bar that provides the ‘click’ when you pull the crown out to set the time or date. 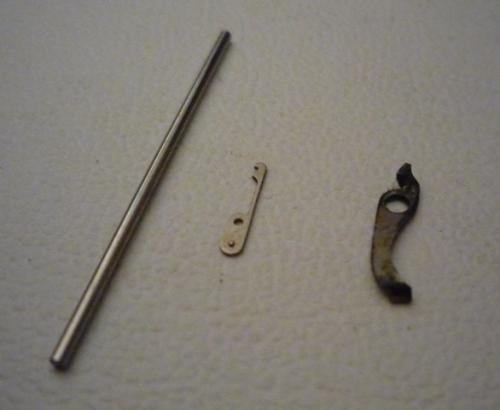 The fascinating thing is how each manufacturer chose to solve the problem.   On the left, the Swiss created a beautifully machined precision part.    On the right, the American created a crude stamped part.   Which was more effective?   Well, keep in mind these watches sold to the same market, so the price was likely comparable.   The Swiss watch might have retailed for more, but the American  manufacturer was almost certainly more profitable.   In the end, the precision part shows a reluctance to give up on a key cultural trait to improve margins.

That is why so many Swiss manufacturers went bust during the quartz heyday, but it is also why their products are so in demand currently.   Even the new American manufacturers use Swiss movements.    Just goes to show that, sometimes, if you can stick it out long enough, the market may value your contributions once again.

Oh, and, BTW, the ‘curtain rod’ on the left is a 1mm stainless steel bar….

* in case you are wondering, most of my purchases where either vintage or cheap, I can’t see justifying over $200 on something I am likely to break…