When electric cars were the future

When electric cars were the future

I was reading Car and Driver’s commentary on electric vehicles recently, which was as follows:

“The media are making all kinds of noise lately to the effect that electric cars are coming, that they’re going to help us kick our imported-oil habit, and that you’ll be able to drive them for pennies a day.

A company that can develop a non-petroleum-fueled car palatable to the masses stands to make a pretty good buck.  That’s why GM will shell out some undisclosed number of billions on electric vehicle development during the next five or so years.”

Sounds about right and probably true too, nothing all that revolutionary about any of this.  This is precisely what, in addition to GM, Tesla and Fisker are trying to do.  Let’s read on:

“It’s a tall order, but GM is already well on the way to pulling it off.   Whether the buyers will be there, however, is a question GM is still struggling to answer.

A study commissioned by Gulf & Western predicts that we’ll have something like 34 million EVs – about one quarter of the national fleet – on the road by the year 2000. GM … has publicly committed itself to mass-producing electric cars by the mid-to-late 1980s – probably 100,000 per year or more.”

Wait.  What?  Actually, the Car and Driver issue I was reading was dated June 1981. 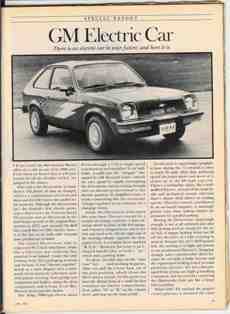 Fast forward 27 years later, more than a quarter century, and the meme is once again in the air:  electric cars are the future.

Are they really?  Even in 1981, just after a period where the US almost ground to a halt due to lack of oil, there was some skepticism about relying on electricity:

“In fact, compared to gasoline, electricity is a downright ludicrous power source for cars.  In terms of volume, it takes 350 liters of lead-acid batteries to match the energy in one liter of gasoline.”

While we no longer rely on lead-acid batteries for portable power (can you imagine one of those in your laptop?), the fact remains that gasoline and diesel are some of the densest forms of power ever discovered.  Electricity is not nearly as portable or dense.

And this may be at the core of the problem for all electric vehicles for some time to come, even if it is just a talking point for most people.  This is because the average person drives daily average distances well within the range of a Tesla or any of the proposed EVs.

Still, Americans like their freedom, and part of that is freedom to roam, without a tether (e.g. limited range, 4 hour recharge).  In that sense, nothing has changed in a quarter century.

In fact, not much has changed in the last 18 years.  You see, 18 years ago, VW showcased their new hybrid technology at the 1990 Geneva Motor Show.  It was to be available in every VW model in the next 2 years.

There are a lot of things that can be learned by reading the state of the early ‘80s electric vehicle market and from VW’s hybrid introductions from the early ‘90s, but one important potential lesson is that oil prices are volatile and cyclical.

Alternative energy gets great boosts when energy markets go haywire and mostly falls down spectacularly when markets calm down, often taking billions in R&D with it.

The companies and technologies that do survive are the ones that are sustained through the troughs, either by prescient companies or by smart government support.  In the United States, both of these are in rare supply.  This goes a long way to explaining why GM is not a significant player in the ‘green’ vehicle market, and why 20% of our electricity is from hydrocarbons and 46% from coal.

Perhaps it’s time to think about energy technologies on a slightly longer timeline than quarterly results and presidential election cycles.   If we don’t, in 2030, we’ll be looking back on 2008 like we are now looking back on 1981.

middle of the electric vehicle special is an ad for the 1981 Mitsubishi/Dodge Colt, EPA est. fuel mileage 37 city, 50 highway.  30 years of technology improvement and we’ve gone backwards.  Even a Prius is not that fuel efficient.